An excellent visit to a mediaeval settlement, organised by the Suffolk branch of the Society for the Protection of Ancient Buildings, threw new light on a puzzle about The Old Brewhouse and the farmhouse next to it: why are they outside the arms of their moat when you’d expect them to be inside?

As set out in the blog about how we reclaimed our pond (see this link), there are the remains of an obvious U-shaped mediaeval moat next to us. But it encloses a flat, empty space, now part off the next door neighbour’s garden.

Last Saturday, we were taken on a tour of Westhall, a Suffolk village where the original settlement has largely disappeared, leaving many clues to its existence, including pottery, raised platforms, moats, ponds, tracks and surviving buildings.

Two points stood out from the talk by archaeologist Peter Warner, who studied the area in great detail early in his career: houses were often moved, as happened at Westhall to Stradbroke Town Farm, a well-preserved house dating to the 15th century, owned by Chris Higgins, who hosted the event. It is probably not on its original site.

Coincidentally, William Clement-Smith, an oak frame specialist working on The Old Brewhouse, told us a similar tale about Ivy Lodge Farm nearby: investigating the structure for a potential purchaser, he found it was two individual frames from different periods joined together in a way that made it seem – to a craftsman like him – that the newer beams and studs had been bought second hand, reassembled on the site and joined rather arbitrarily to the old building.

The second point made by Mr Warner was that sometimes the farmhouse would be outside a moat because another more important building, the manor house to which it belonged, was inside.

Our Spab group of a dozen people struggled up through brambles, (entertained to strident protests from a householder who disputes what we all thought was a very obvious right of way!) to a large almost hidden moat. This enclosed a substantial mediaeval farm that was abandoned in the 1940s because its land was taken for a wartime airfield. The ruined timber frame was visible in the 1970s, but there is now no obvious sign of the building above ground. So a house abandoned centuries ago might be much more completely obliterated.

This all seems like good circumstantial evidence for the suggestion we have heard that our own moat did once enclose a mediaeval building, which was moved or has disappeared. It seems it is quite easy to up sticks, literally, and cart the posts and beams of a 16th century house to the other side of a moat. One reason for that could be the slightly higher ground on our side.

If would be just as interesting if there was once a manor house on the other side, between the ams of the moat. Not sure, however, that the neighbours will be up for excavations to find out more!

Below : Peter Warner describing how the apparently featureless fields were full of pottery and other traces of the old Westhall. The track just visible through the wheat is a modern right of way to St Andrews, Westhall’s lovely village church. 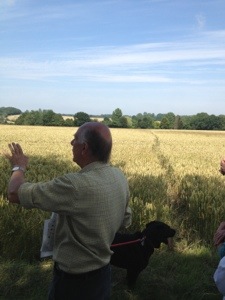