We have owned over the years five early 19th century houses, two of them Grade II listed and another in a conservation area, so we had already come up against some of the issues involved before we bought the cottage. But The Old Brewhouse, more than 400 years old, was of a different kind entirely, and needed some serious thought before getting started.

We joined the Society for the Protection of Ancient Buildings, prompted by Rachel Bower, a friend and neighbour in London who was education secretary of SPAB. The society has campaigned since the days of its founder, William Morris, for the sensitive repair of old buildings. SPAB distinguishes this process of repair from restoration, a dirty word in its vocabulary. The SPAB journal and publications are an excellent source of advice and leads.

The society was founded to campaign against enthusiastic Victorian restorers who believed they could improve ancient buildings as they repaired them, but who in practice were destroying much of what they found, by ripping out and rebuilding; they often replaced old material with  pastiches, both structures and details, that reflected their own views of what might have been there originally, hiding the wear and tear of centuries.

Restoration, in this sense, means interfering with the history of the building as displayed in the fabric. The use of  the word as the title of the BBC’s recent series about rescuing old buildings sent signals that would not have been appreciated by Morris.

Just as bad as creating pastiches, the wrong materials were often used in 20th century repairs as well as restorations, particularly cement; this was because of a misplaced belief that anything modern was better.

For the owner of a timber framed house such as ours, about the most important issue when considering repairs is cement versus lime. Cement is a tremendous material, but its strength and impermeability work against it when it is used in combination with the older, more flexible materials with which most buildings before the late 19th century were constructed.

In particular, old mortars for brick and stone, renders used to cover the outside of buildings and paints used to protect the surface were based on lime. The main characteristic of the mortars, renders and paints was that they were relatively soft and flexible and also permeable to moisture. This did not mean that every shower soaked the building; the materials would shed rain, but their permeability was high enough to allow water trapped inside the structure to gradually evaporate.

With modern impermeable materials, a building is constructed to be completely watertight.  Damp air from human activity inside is dealt with by ventilation. The mechanisms in a timber framed wattle and daub building are very different. Condensation is absorbed by the clay walls but can escape through them to the outside air, because clay easily absorbs and expels water. This is breathability. It has become all the rage in outdoor clothing in the last 20 years. It is now just as much in demand for old buildings.

There are drawbacks. The walls and the building may become more obviously damp in prolonged wet weather or winter occupancy when there is less ventilation. Just like a decent breathable jacket, the damp will disappear quickly when conditions improve, because it does not become trapped.

Another important quality of lime is that it is much softer than cement, and so when a building moves it allows the structure to flex. If you look down the walls of a long Georgian terrace in London,  they often appear to be about as flat as corrugated iron and to move up and down as some houses have sunk and others have risen haphazardly, adjusting to the heave of the clay in the ground.

But if the original lime mortar is in place, there will be very little cracking, because the brickwork can flex. If  the pointing has been replaced with cement, there may often be major cracks running across the walls, because it is too rigid to absorb movement.

Cement render is both rigid and water proof, so if a timber-framed building moves, as they constantly do, the cement cannot absorb the stress, and it cracks and lets in water. Worse still, cement render is so impermeable that water trapped in the walls – much of it produced by condensation inside the house – cannot escape, so the timber remains permanently damp and is therefore much more likely to rot.

Exactly the same points can be made about modern masonry paints, which trap condensation inside the walls of old buildings and crack when they move. Limewash, in contrast, flexes and breathes.

Lime render and limewash have irregularities and texture that are easy to identify from a distance with a bit of practice. If you drive across Suffolk or Essex by back roads noting the proportion of houses rendered and painted in lime, it will be very small.

Until a few decades ago, most local painters and builders made no distinction between ancient and modern; they plastered cement render and masonry paint on the vast majority of old timber framed buildings, in the mistaken belief that waterproofing was an improvement. This has stored up huge problems for future conservation.  Conservation officers now insist on lime for all repairs to listed buildings where lime was part of the original construction. But not all owners ask and not all old buildings are listed.

We were shown an example nearby of a cottage of very similar construction to ours where only a few years ago a local builder had ripped out the clay infill and replaced it with fibreglass insulation. On top of this he had nailed plastic sheets, then wire mesh and finally a cement render. The room inside was lined with plasterboard between the oak studs. When this plasterboard was taken away and the insulation pulled out, the plastic sheet and the back of the timbers to which it was nailed were running with water. The repair had produced a watermaking machine, trapping and liquifying condensation from inside the house. If it had been left much longer it would have rotted the wood. The 20th century materials have now been removed and the repairs have been done all over again with breathable materials.

More recently, we heard of a nearby house where the owner discovered that the panels had been completely filled with concrete. Shuttering had been placed either side of the oak frame and the concrete poured into the panels; the shuttering was removed when the concrete set. This was not only a very poor insulator, it created large amounts of condensation. Removing the concrete panels is a major job.

Most of the mid-20th century repairs to our cottage were done with cement. Where the walls were crumbling, cement render was slapped on; where there were holes in the wall, cement and rubble were used to plug them; the end wall exposed by the collapse of the south part of the building was covered in thick concrete render by the farmer who owned the property at the time.  And where clay panels fell out, Thermalite blocks were later installed, which are better than concrete, because they have a certain amount of breathability and they are also much easier to remove. 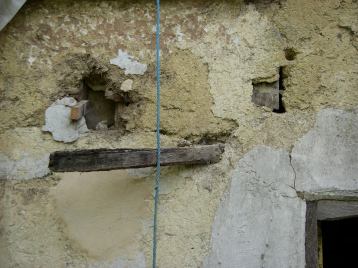 The building still has a considerable amount of the original clay daub left. Nearly all the walls on the first floor are clay, even though in some areas it has been surfaced with cement. Rather less than half the clay was left at ground floor level. There was also a complete and untouched clay partition wall on the first floor, rising to the roof, and a largely complete lime plaster ceiling in one of the bedrooms (though like all the exposed internal clay it had been painted with emulsion – luckily the trade type, which has some breathability. Regular home decorating emulsions from the major paint ranges such as Dulux do not have breathability).

We decided to try to preserve every scrap of clay we could (see the headings under Techniques above). It is highly breathable, very flexible and extremely easy to repair, once a few simple techniques have been mastered (in our case on an excellent two day wattle and daub course offered by Essex County Council near Braintree). There is also evidence that clay has relatively good thermal insulation properties, thickness for thickness. We agreed a long term plan with the conservation officers for removing cement render and replacing it with lime, repairing any damage to the clay underneath with clay daub.

In 2013 we moved on from the idea of automatically replacing  clay where it has been previously removed have found other solutions – see the posts on wattle and daub and on hemp insulation.

Removing cement is not a simple process. There are some areas where there is a risk that it will be more damaging to the structure to remove the cement than to leave it. Other areas have cement render inside and outside. For the moment the plan is to remove only the outside cement, because doing both will probably damage the remaining clay, and very likely make some of it fall out. To the extent that there is damp trapped around the timbers, we will make sure there is one route for it to escape the building; where there is still cement render inside, mostly a thin layer  used instead of plaster, it may at least slow the absorption of ordinary household condensation into the wall. In due course we hope to remove the internal cement too. We will also work only gradually on the removal of emulsion paint, because it is tricky to do without damage when there is clay underneath, and not so urgent with trade emulsion. And we will replace the concrete floor.

An example of  a very different working philosophy can be found a few miles away from us in Suffolk, where an ancient guildhall was restored (in the Victorian sense so hated by SPAB) almost out of existence; 19th century clay daub and timbers were removed, and an attempt was made to recreate what was conjectured to be the original 15th century building, producing what at best was an imaginative pastiche – more a film set for Robin Hood than a historic building.  The process was shown blow by blow on Grand Designs. William Morris would have been horrified.