I go into a great deal of detail in these floor posts, on the grounds that if you’re interested in repairing a very old floor you’ll need it; for the rest, read no further! Over the years it’s the blog posts like this that seem to be read most, I assume by people doing similar jobs.

Rotten sections, weakened sections, blackened, stained and crack and holed sections – the whole messy old floor came together into one attractive, if battered, whole, once beeswax polish was applied. 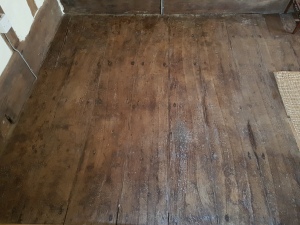 It’s great what a coat of beeswax can do for a damaged floor.

So here are some other jobs along the way that added up to quite a lot of work and time. To be honest, it sometimes seemed almost too fiddly and irritating to carry on; but then contemplating a finished area of ancient, interestingly textured and coloured boards that had served the farmer and his workers well for many years, we were reinvigorated: it really was worth persevering.

(1) We had to repair a really bad meter-long crack that weakened a board. We prised it further apart with a wedge and used a spatula to push in epoxy resin, after masking the edges with tape. After adding the hardener (1 to 5 epoxy), a brown filler was mixed in, which stiffens it to an easily manageable paste that fills gaps of several millimeters while keeping its strength. There was some dark wood dust gathered from the holes drilled for new screws, and that was added to the mix.

Wedges were pushed in from the outside of the board to force the broken edges back together, and the surplus epoxy scraped off.

There was one other similar crack and a number of smaller breaks and cracks that were treated similarly.

Epoxy in DIY shop quantities is very expensive, so we keep on the shelf for various jobs a 500 gm pot of West 105 epoxy, with a 100gm pot of 205 clear hardener and a 150gm tub of 405 filleting blend. It is also worth buying West’s special cleaning liquid for brushes and tools, which works well as long as the resin is not left to harden. For mixing small quantities, skip the syringes they sell for measuring and buy some kitchen measuring spoons. Properly stored epoxy lasts for years and is far cheaper overall than buying smaller packs. It can easily be found on line.

(2) A piece of plank about 150mm x 400mm was missing. The broken edges were trimmed, and a piece of new oak was epoxied to the damaged plank using a scarf joint at the narrow end and a butt joint along the length. This will be stronger than the original board. It will be stained to match.

New oak, glue curing while held by wedges, to be stained later.

(3) There were half a dozen holes in the planks, some quite large and round from pipes that had evidently been run through the floor; others might have been ragged knot holes that had enlarged themselves over the years.

For the larger, regular holes it was worth making a pattern and cutting a piece of oak board – we had some left from making a garden terrace – as a plug. They did not have to be fitted to high precision but they were chamfered a little all round so the edges of the patch were slightly wider at the top than the bottom so they would stay in place while glue set; fitting them required multiple adjustments with a file after they were sawn. They were the glued with epoxy made into a thick gap-filling paste with filler.

A more awkward narrow, elongated hole (below) was filled with a number of slivers wedged side by side, glued to each other with PVA, and tacked in place with pins while they dried. It was finished off with stopping, and seems quite strong.

(4) One area of plank about a foot square had been damaged by wet rot at some stage but dried out. The board did not quite break but was weak. This was supported from underneath with two pieces of oak plank screwed between the nearest joists (from the kitchen below).

A soft patch was cut out and replaced with a small rectangle of new oak, already weathered grey because it had been stored outside.

(5) The main beam supporting the whole floor was so weakened by old rot and insect damage that it was a case of reinforcing or replacing it. Years ago it was reinforced by a specialist carpenter with a T-section steel ‘flitch’ beam dropped into a slot cut in the beam and epoxied and bolted to it. The top of the steel beam is however flush with the floor and hard to cover without making a ridge to trip up on. So we decided just to paint it black rather than cover it to pretend it isn’t there.

One thought on “Repairing the floor – 3”