The first thing to do was to protect the room underneath from debris falling through the many cracks as we worked on the floor above. The solution was a plastic tarpaulin tied to the joists: 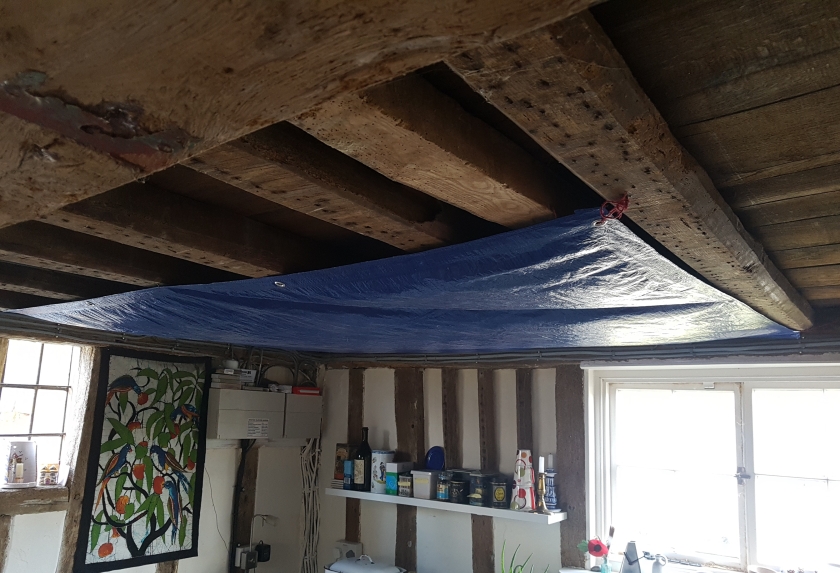 The second thing to do was to make sure the boards were firmly on their joists so not springy when walked on. There were two bad patches, where the boards had to be screwed down hard onto the joists to stop movement. Since the undersides were exposed, we were also able to push in wood spacers from below.

The hardboard sheets that had been protecting the floor were removed, and the encrusted dirt in the gaps between the planks was raked out thoroughly with an old screwdriver. Then began the process of fitting slivers to the cracks.

This was a fussy job: where the gaps were uniform, it was possible to choose a sliver width close in size, and insert two or three feet of it. But most of the time the gaps were so irregular that this would not work, so much shorter sections of sliver of the appropriate width were cut and then butted up against each other along the gap.

Professionals working on more modern floors would glue them into place before sanding down the whole area by machine, including the parts of the slivers sticking up above the boards, to produce an even surface. This was how the makers of the slivers expected them to be used.

With sanding ruled out for this old and well-worn floor, the best method we could find was to use an old-fashioned spokeshave on each and every section of sliver after inserting it in a gap, paring it down to the level of the boards either side. In awkward places, a Stanley knife used carefully could also do the job, and where a sliver was set between two uneven boards the knife could be used to cut the sliver at an angle, to make less of a sharp edge between one board and another.

This sounds trickier than it turned out to be in practice: with care, there were very few places where the spokeshave seriously caught the old boards, and the Stanley knife sorted out the rest; we found it possible to make a reasonably even floor surface without sanding.

This would have been the wrong method with smooth Victorian boards, but these older ones are so uneven that small variations are hardly noticed. And when the slivers were eventually fixed in place, if they were still a millimeter or two proud of the surface they could be tapped further in with the mallet.

Before that could happen there was an essential intermediate stage: the fitted slivers were taken out again and coloured with Colton’s Jacobean oak stain, which produced a good dark grey-brown, close to the shade of the boards.

Staining them in situ would have risked smudges and spills, so it was better to pre-colour them. In this particular case, with an unplastered ceiling underneath, the bottom edge of the slivers would be visible from below, and would look odd without colouring.

We had to be very careful to lay the stained slivers down to dry (hetevon scrap hardboard) in the order they would be inserted in the slots: if they were put in to the floor out of order, they would not fit.

Once dry, a generous amount of PVA adhesive was squeezed out of a bottle down the sides of the slivers and smoothed out with a brush, then the sliver was inserted in its slot between the boards and if necessary tapped down with the mallet.

If a section of sliver tried to spring up, then a very small panel pin could be tapped in with a pin hammer to hold it firm, though it was not driven all the way, because it needed to be pulled out again after the PVA had dried.

There were also some big cracks in the boards themselves, showing daylight through from below in some cases. These, too, required filling with slivers, and they were even more irregular than the ordinary plank gaps. The Stanley knife was useful for whittling slivers into shape to fit some of the cracks.

It was by no means the end of the job: there were still much smaller gaps left after fitting the slivers, caused by the irregularity of the big gaps between the boards, and also smaller cracks in the boards themselves too tight and irregular to insert slivers; together these left quite a lot of hairline cracks in the floor and also small gaps along the sides of the slivers, visible after dark when the room below was lit but the room where we were working was unlit.

The solution was to use Brummer stopping, an old fashioned filler favoured by joiners (and difficult to find, especially in dark oak: we eventually located an on-line source).

Masking tape was used either side of the remaining small gaps to protect the boards, and the stopping pushed in with a trowel, forced down using its edge, and raked off. Actually, it often turned out to be easier and more effective to push it in with fingers and thumbs and just use the trowel for removing surplus – the stopping washed off easily under a tap, even when dry. The dry colour was a good match for the boards.

However, there still remained a few hairline cracks visible when the room was dark. The solution was to use a brown general purpose sealant (£2.50 a tube from a builder’s merchant) from below, running it long the board edges using a standard sealant gun. This filler has the advantage of keeping some flexibility so will not crack – the boards will always have some residual movement when walked on. Stopping would be less use below because it is brittle and would drop out of the ceiling.

This stage was only necessary because we planned to leave the joists and boards permanently visible in the kitchen below. With a plastered ceiling we wouldn’t have bothered, because there would have been no light penetrating the room above after dark and a combination of the wax to be used on the floor and dust would soon fill small cracks.

A small workbench was useful to have in the room for trimming the slivers with a tenon saw, and the tools required were simple, as shown in the previous post.

Those were the basics of the job, which needs patience and a systematic approach. It was only worth the effort because it was bringing back into use a floor of great age.

This floor had taken a battering over the years, and there were several other types of repair job to do before finishing off with a good coat of beeswax. These will be described in the next post.